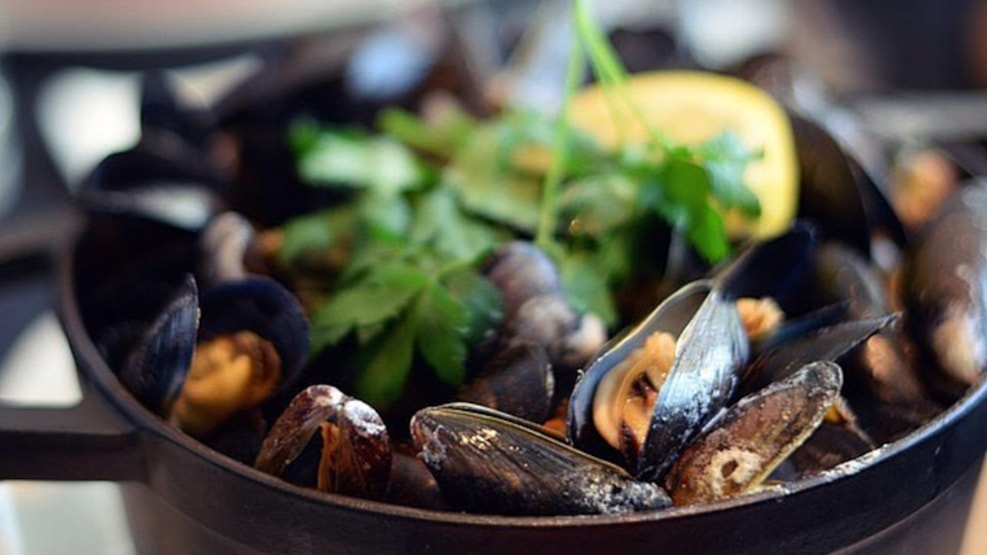 In Løgstør, you can purchase the mussels here:

Help to picking the common mussels yourself
When visiting Løgstør and the Limfjord, you must try to pick your own common mussels. Here, you will find some tips for doing it and getting a great experience. But remember to bring your common sense!

Advice #1
Avoid collecting near a harbour or freshwater outlets. From both places, there can be large concentrations of pollution, which are collected inside the animals that live close to the outlets.

Advice #2
Don’t pick the mussels above the sea. To be sure, that the mussels are fine, you will need to go out at a depth of half a meter.

Advice #3
If the water is unclear or muddy, it can be because of algal bloom! If that is the case, you should not be picking the mussels, as there can be poison in the alga, which is not good for humans even though common mussels are eating them with pleasure.

Advice #5
If you want to make sure that the mussels are suitable for eating, then you should not be picking the mussels in May, June, July, and August.

Advice #6
Buy your common mussels at an authorized distributor. If you want to make sure that the mussels are suitable for eating, it can be a time-consuming process, which can be a good reason for buying them at a place that is authorized.

Advice #7
If you have collected your mussels yourself, it can be an advantage to put them into a bucket of fresh and clean water from the surface of the Limfjord. At the bottom of the bucket, you must place a grid a few centimeters from the bottom, which the mussels must not fall through. If you leave your mussels in the bucket for 10-12 hours, most of the sand from the mussels will end up at the bottom of the bucket, but you can also leave the mussels for a shorter amount of time. But remember to place the bucket at a chilly place in the shadow and remember to change the water a few times so the mussels won’t die because of lack of oxygen. If you buy the mussels, remember to buy mussels that are already cleaned for sand.

When all these steps are completed, you can start looking for delicious recipes for mussels.

One last piece of advice: All the mussels which are not open after they have been cooked need to be thrown away; the rest are now ready to be enjoyed! Bonne appetite!

The town of mussels is recommending mussels from Vilsund Blue. These mussels are picked from the Limfjord under controlled conditions. The mussel fishery in the Limfjord is MSC-certified, which means that the fishing is sustainable.

At the towns of mussels, you can experience mussels in many ways, and of course, you will also find lots of delicious dishes with mussels in the town’s restaurants. The town’s mussels are also creating a foundation for jewelry, art, a festival, and much more.

But it has certainly not always been on the cards that Løgstør should be known as the town of mussels, as people in the 20th century, did not think that mussels were food for humans. In the beginning, the mussels were reserved by people from Copenhagen, but after two world wars and a fishing collapse, the mussels from the Limfjord became a part of the national heritage.

The mussel fishery in the Limfjord arises from the oyster fishery, which in 1850 was organized in the Limfjord sister company, which had a monopoly on catching and processing all types of shellfish in the Limfjord. It was World War I that boosted the catch of mussels. Mussels are filled with egg white, and canned mussels were cheap and nutritious provisions for the soldiers in the trenches in a time of food scarcity. It appeared to be low-hanging fruit, and the fishermen in the fjord began to purchase tools for scraping the mussels, but a ban on mussel exports put an end to the catching. Only with World War II, it began to pick up speed again. Suddenly there was a huge demand for mussels - especially from Germany. A new fishery was born. In the following years, the mussel fishery exploded from an even level of about 7000 tons annually to 85,250 tons in the record year 1943. The mussel farms were suddenly all over the fjord, and the mussels' "beard" was transformed into a feeding meal, among other things at an incinerating plant in Løgstør. The shells were used for road filling.