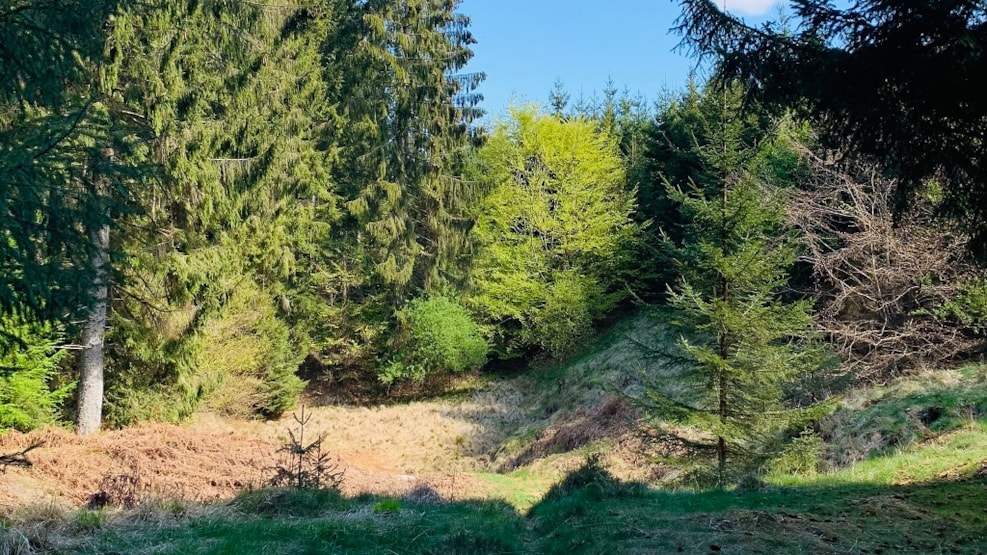 The largest sinkhole in Rold Skov is Hestegraven.

The sinkhole is located in the part of the forest area called Hesselholt Skov, which is a bit south of Lille Økssø and east of the old country road “Røvernes vej” close to the restaurant “Røverstuen”.

Sinkholes usually occur when the rain, mixed with humic acid, runs down through the lime cracks in the underground and dissolve the lime.

When the lime dissolves in the underground big cavities occur and at time the surface layer will no longer be able to support itself and collapses. This is how sinkholes are formed.

There are several places in Rold Skov where the lime lies high in the underground. Therefor many of these sinkholes occur when the weather hits with heavy rain.

Hestegraven is one of the bigger sinkholes in Rold Skov. The other one is “Røverstuen” close by. How these two sinkholes occured are actually a bit of a mystery. The lime in the underground is about 50 meters underground, which is very deep unlike other places in Rold Skov, where sinkholes have occurred. The tow sinkholes can more accurately be described as subsidence over a fault – however there is no evidence for this.

There is an old myth that claims that Hestegraven occurred when a newlywed couple drove through the area in a horse carriage and suddenly fell into the sinkhole and disappeared. A more plausible legend is that the sinkhole was originally used in the in 1864, to hide the horses from the Germans.

Therefore the name ”Hestegraven” which translated into English is “The Horse Grave”.

Visiting Hestegraven is a very special experience. Water from the nearby located lake “Lille Økssø” leaks into to the sinkhole and disappears in the deep darkness. You can both see and hear the water running down the hills.

When exploring the sinkhole, be very careful. Going there is at your own risk.