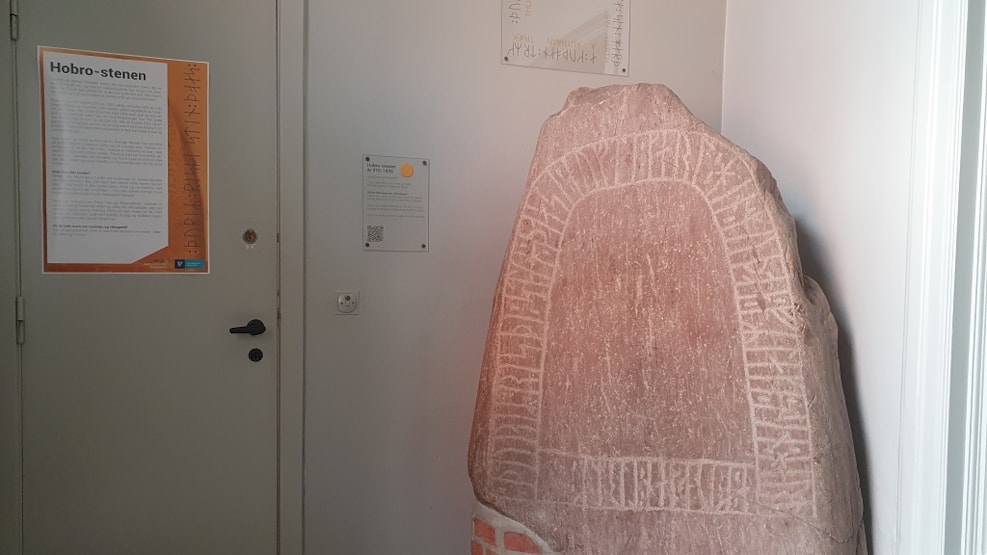 "Thore put up this stone after his fellow "Karl den Gode", a very noble-born boy"
A number of things indicates that Thore and Charles were Swedish Vikings, who visited the part of the country about year 1000 about Hobro.
Near Ridge in Västergötland the find is a corresponding runic stone with rather identical inscription, and since such an overenstmmelse hardly may be accidental, you can imagine that Thore and Charles have participated in a blow around here, in which Charles fell.Thore travels this stone after his "fellow" and returns then to Västergötland, where he still puts up a monument.
That the stenrejser originates from the Swedish territory is also confirmed by that the rounds on the Hobro-stone have marked traits that otherwise are seen on inscriptions in Västergötland.
The Hobro-stone stood in 1627 with safety on Hobro Kirkegård, but written springs inform that it was moved to that already in 1368 inconnection with the church building.

After the construction by the present church the Hobro-stone was an appointment placed at the church's porch before it in 1925 got one's present placement at Hobro Bibliotek.