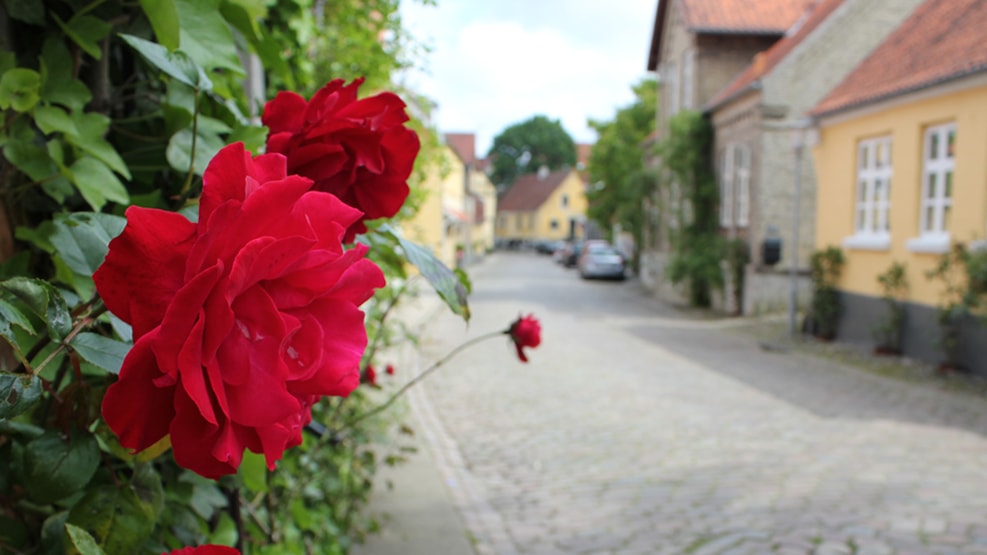 Mariager is one of Denmark’s smallest market towns. Until 1410 it was only a small fishing village and ferry-stop on the way between Randers and Aalborg.

When you stand in the middle of Mariager, you easily feel like time hasn’t changed a thing in the last few hundred years. Mariager is called the “City of Roses” and is an idyllic town with cobblestone streets and old timber-framed houses along with roses all over town. Mariager is a living attraction for the tourists and a privilege for the hospitable citizens.

Mariager is still a small town today, with approximately 2500 citizens. Mariager – “Marias Ager” is named after The Virgin Mary.

On the square you can find the old city hall from 1822.

The old city hall is a majestic big building located in the town square. The architectural structure of the building makes it stand out and it is kind of a monument in Mariager. On the top of the building you can see the “landmark” of the city – The Crane, and also the 2nd sentence of “Jydske Lov” written in gold: ”Var ei lov i lande da havde hver meest som meest maatte gribe”.  Which means: If there wasn’t a law in the country, the people that had most, where those that had gathered the most. Meaning that people would take anything which didn’t belong to them, because they couldn’t get punished for stealing.

The gold plated crane which is solid planted on the roof of the old town hall, is resting on one of it legs and is holding a stone with the other one. The crane is known for guarding the town of Mariager and its citizens.

The reason why the crane is holding the stone is actually so the crane doesn't fall asleep. If the crane fall asleep, it will drop the stone and the the city will no longer be protected by the crane. The crane is an ancient symbol of alertness and immortality.

The establishment of the Birgittiner convent in approx. 1446 resulted in the rapid sprouting of trade and craft industries.

The convent was a convent for nuns of the Birgitter order and was one of the mightiest in Jutland. The town of Mariager became an escape for many, which resulted in many shelters and hospitality. Along with the convent came the impressive abbey church, which was four times larger back then, than it is today.

From Market town to an Industry Town

After the reformation and the closure of the convent, Mariager lost a lot of its meaning. Back then the town only had 400-500 citizens, and the town was given the rights of a market town.

Many of the buildings and houses that can be seen today with their charming looks is back from that time.

Industrialization came to Mariager around 1960. The mostly known is Akzo Nobel, a huge salt factory, which is own history and importance for Mariager.