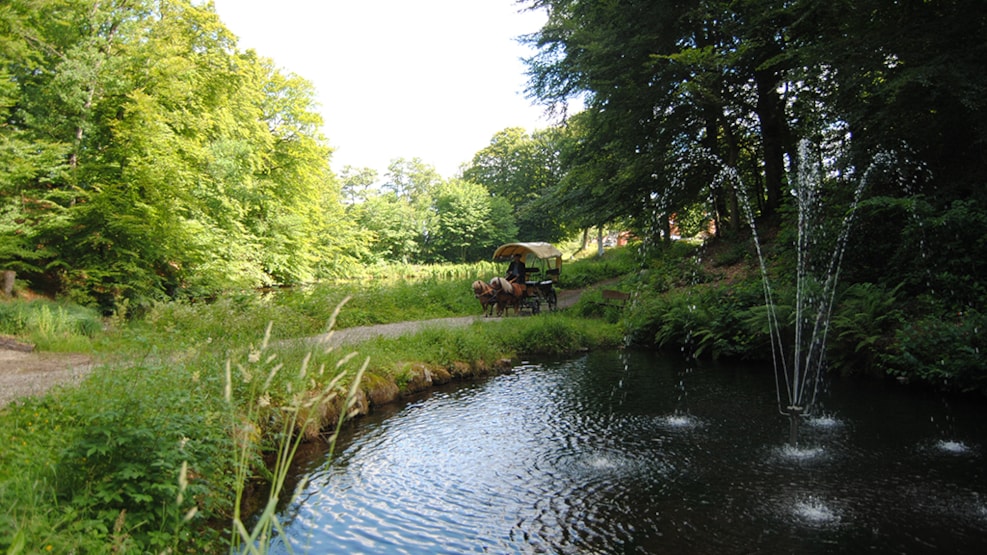 For a hundred years, the park at Munkholm was the citizens of Mariager’s favoured destination for excursions. The park offers visitors attractive nature, a lake and a small pavilion.

In old accounts of Mariager, it’s mentioned that the forests along the fjords were so dense that a squirrel could run from Hobro to Mariager without touching the ground in medieval times. These dense forests included what is known as MUNKHOLM today.

Not so long ago, the town’s citizens gathered for special celebrations (constitution day, election days, royal birthdays and the like) in the Square at Mariager. From here, the trip continued out to the celebration place at Munkholm, where talks were given and there might also be entertainment and circuses. The celebration place was earlier on located near Eremithytten (the Hermit’s Hut), where it was dug into the hill. The story of the Hermit’s Hut is believed to stretch right back to the medieval period.

Not far from the hut is "Helliget", which for a long time after the Reformation was visited for its healing powers. Folk tradition mentions this spring as the place where two knights, Hem and Sem, fought a duel over the lovely virgin Maria. Both knights were killed. In her sorrow, Maria drowned herself in the fjord. Her rich estate fell to the monastery and her last resting place, Mariæ-Ager, is named after her. The spring is said to have arisen at the place where her tears fell upon her suitors’ corpses!

Even in the 19th century, the spring water from Munkholm was still highly regarded and was drunk at the dinner table by the people of Mariager.