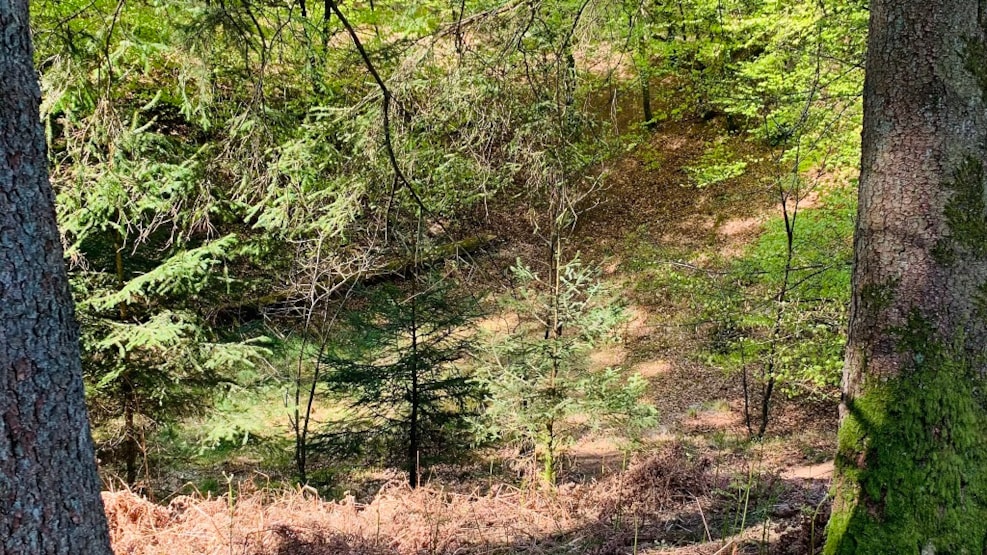 In the part of Rold Skov, called Hesselholt Skov, you’ll find one of the many sinkholes there are in the area.

This one is called Røverstuen and is located close to the restaurant with the same name Restaurant Røverstuen.

The name in Danish is associated with the areas well-known robbers, that ravaged in Rold Skov a long time ago. They are called “The Robbers from Rold” and are to this day, still a big part of the history of the forest.

The sinkhole is about 12 meters deep and 35 meters wide.

How does sinkholes occur?

Sinkholes usually occur when the rain, mixed with humic acid, runs down through the lime cracks in the underground and dissolve the lime.

When the lime dissolves in the underground big cavities occur and at time the surface layer will no longer be able to support itself and collapses. This is how sinkholes are formed.

There are several places in Rold Skov where the lime lies high in the underground. Therefor many of these sinkholes occur when the weather hits with heavy rain.

Howewer, there is a bit of a mystery to how both Røverstuen and the nearby located Hestegraven occured. The lime in the underground here is about 50 meters under the surface, and the sinkholes are only about 12 meters deep, so there must be other explanations to how these two occured.

Some say that the holes where made by The Robbers of Rold, to hide from the nearby road where they attacked and robbed the travellers passing through.

If you want to explore Røverstuen Sinkhole you can park at Mosskov Pavillonen at Møldrupvej 34, close to Store Økssø. From here you can go south to Hesselholt Skov and find the sinkhole.

When exploring the sinkhole, be very careful. Going there is at your own risk.