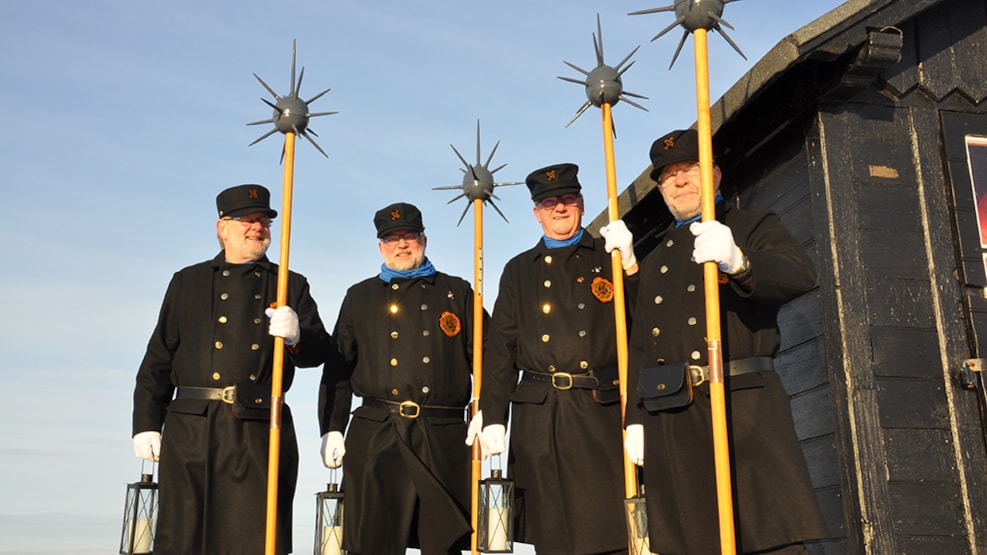 Every Wednesday in the summer season, you can experience a tour around the old part of the town in Løgstør together with the Løgstør Town Watchman's Guild.

During the tour, the guild is singing old watchmen songs and telling stories. The guild was made on the occasion of Løgstørs 500th birthday in 2016, but there have been watchmen in Løgstør before that.

In a time before there were streetlamps, the dark as night streets in Løgstør could be a dangerous and scary place. To protect the Citizens, the watchmen were walking around the city, announcing the time of the day while singing traditional watchmen verses.

The first evidence of the watchmen in Løgstør was found on May 4 in 1781, where a watchman announced a new residence to Løgstør by using a drumbeat. The watchman was called Michael Jørgensen, and was proberly the first watchman in Løgstør. The watchmen were walking around in the city at night and announced the time of the day from 8 pm to 5 am. During the day, it was also the watchmen's job to announce the important messages in the city, while they were beating at the cities drum to attract the citizen's attention.

The last watchman, there were singing watchmen verses were Chr. Kjær around 1880. After this, there were no more watchmen in Løgstør, before 2016, where Jørn Christensen, Leif Myrup, Finn Jensen, and Erik Stagsted wore the watchmen uniform and the morning star and took the name: Løgstør Town Watchman's Guild.